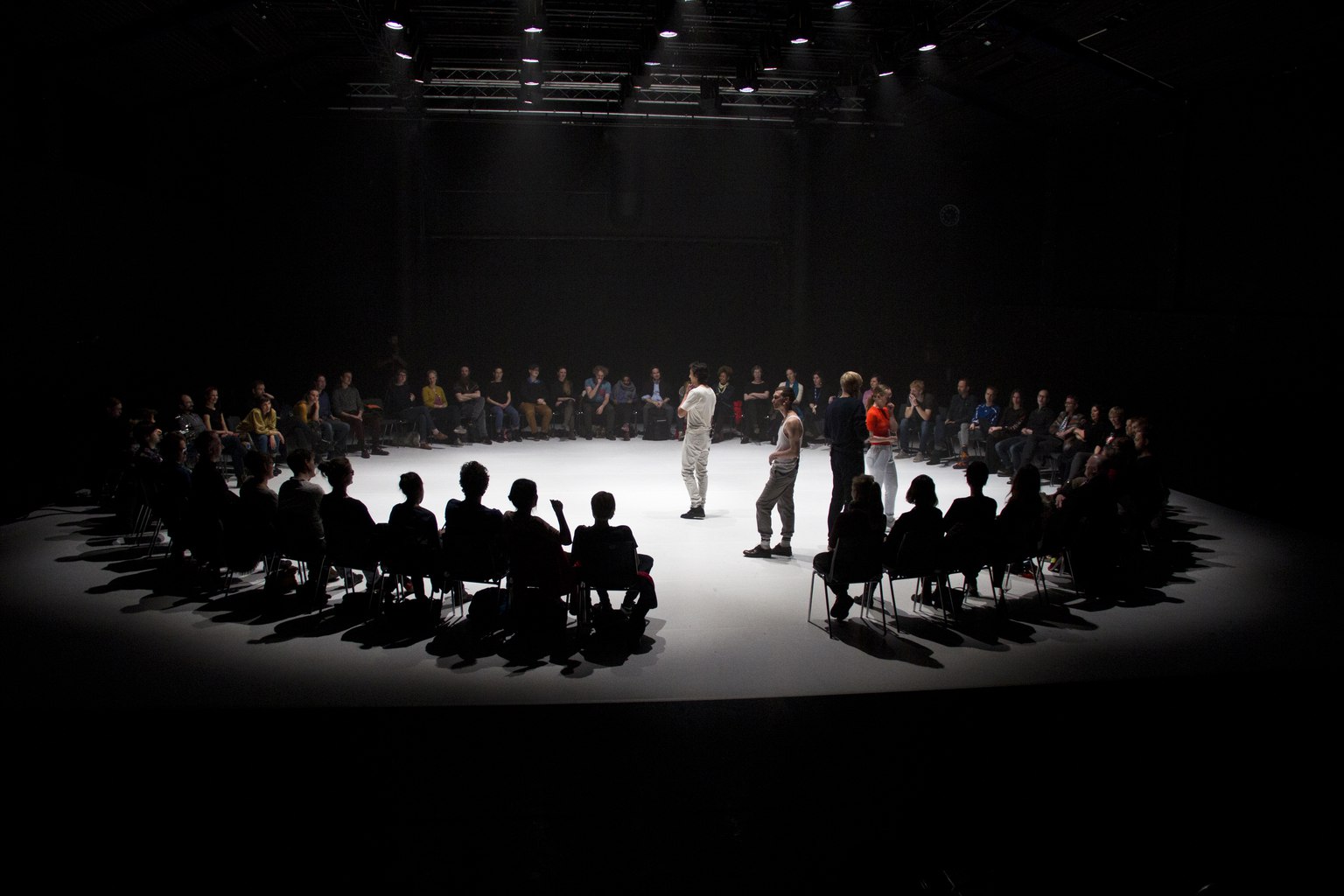 TRANS- is a type of ceremony in which the audience is both spectator and participant. The ceremonial setting is a space that allows us to responsibly investigate ‘immanent violence’ - which we have defined as the tyranny embedded in language and that which appears as the prime example of contemporary violence. In the intimate frame of forty chairs the audience is seated in a circular formation, which creates the stage for the 4 performers. Over the course of 50 minutes the performers engage in a description practise that takes in the whole space and everyone in it. The idea is that in this practice the performers invent nothing and deny nothing.

In the piece the performers respond to the bodies in front of them by describing what they see. The performers use only short, independent sentences, or calls, to ensure that one unique moment in that meeting is quickly replaced by the next and so forth. The practise aims to stay sensitive towards the way bodies constantly signal and respond to each other and adapts the use of language to this ongoing exchange. It allows language a movement as opposed to the static quality of its definitive habit.

The text that is produced in TRANS- can be described as a piling of autonomous images. It produces an, at times narrative, at times poetic density of meaning in the continuous layering of moments. Coming from four different performers simultaneously, the description practise can even cause language to be far too much, to overflow the entire space in one grand auditive, almost noise based texture, but at the same time it never neglects to offer the audience a space to access and orientate themselves in the piece. TRANS- hosts many voices, journeys and levels of involvement at the same time.

The point of liveness in this context is what allows this practise its purpose - at the centre of it is an instant feedback loop between the performer being affected by the audience they observe and the audience being affected by what is delivered in response. The writing of the text in TRANS- therefore stems from the presence of whoever attends the performance and is instantly composed and edited in a collective manner - that is, between the four performers on stage and the sound artist whose contribution also happens live. In this way, every performance produces a unique text - as opposed to delivering something pre-written with an unbroken narrative. On the contrary, the strands of narratives that occur in TRANS- are written by the individual audience members and the individual journeys they undergo throughout the performance. Compositionally the piece is supported by a continuously circling choreography that sends the performers gradually spiralling through space - both as a group and as individual bodies. The choreography gives a sense of continuous motion in the space that mimics the way that contexts, perceptions and relations are moved by the text.